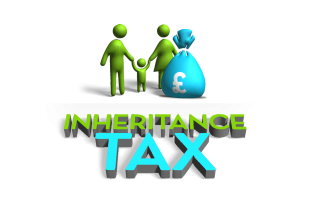 Styx in the throat: How will your executors pay your Inheritance…

Go for it Shadwell: ISAs, ISAs everywhere. Why now, more than…

Is cash such a good thing?: One good reason why cash… 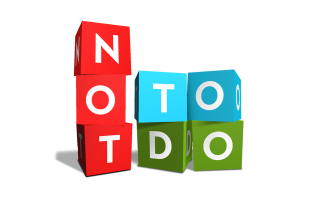 The outlook, part 2: Yes, there’s lots of uncertainty, but it wasn’t…

Defensive or Cyclical? Which is best?: Not all shares are created…

Inheritance Tax – Forgotten, but not gone: Could it be time… 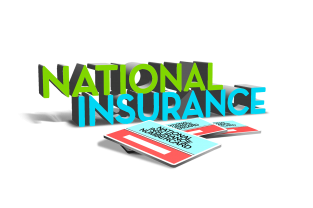 National Insurance – The basics in the current tax year: National…

Link: Workers may need to retire as late as 81 for…

Buy to Lets and second homes – The headwinds are coming:… 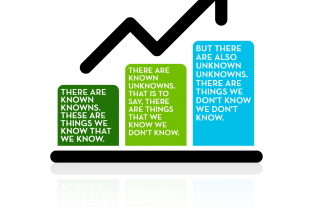 Extrapolation Bias………….. Yes, you’ve read that correctly: Have a think about…

Market timing and investment time horizons: Why you should never try…

Up until the 2008 credit crisis, at times which might have originally been considered as normal, interest rates closely mirrored headline inflation.

Turning to the chart below, since the credit crisis, Bank and Building Society interest rates (green) have tended to be slightly higher than Bank of England base rates (black) but still well below inflation, regardless of whether you measure this by the Retail Price Index (red) or the Consumer Price Index (blue).

So what does this mean? Taking 2013 as an example, on average the real spending power of cash on deposit fell by around 1.2% to 1.75% per annum depending upon which government inflation rate you believe. 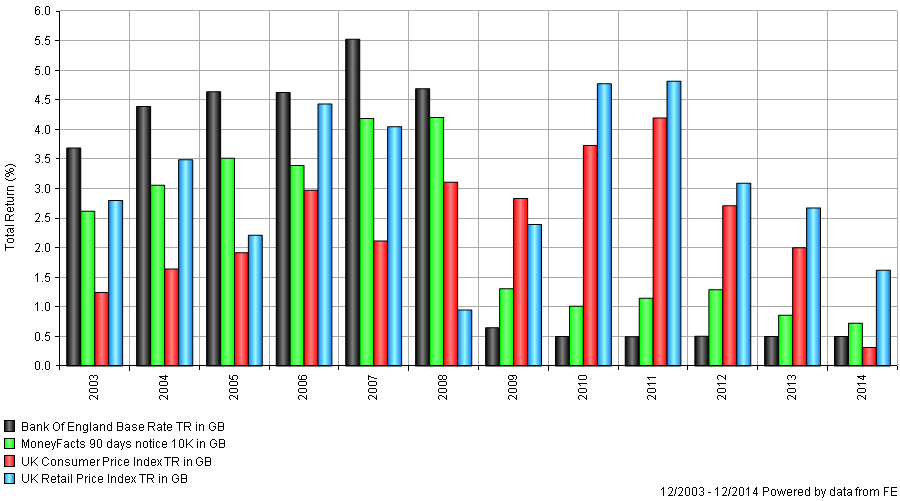 Historically, different asset types have performed well at different stages of the economic cycle. This is not always the case but until interest rates peak and begin to fall, often equities (shares) and some property related assets (but not necessarily residential property) will outperform cash on deposit. 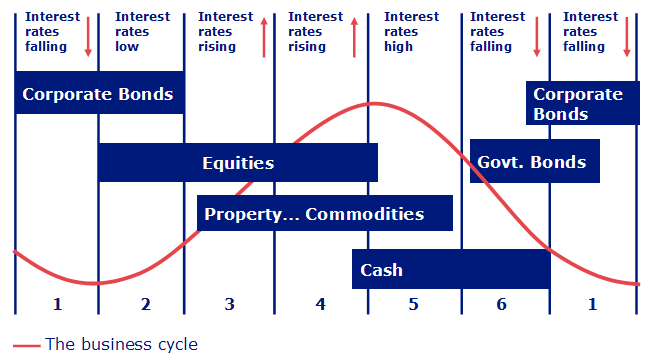 Turning to the chart below, ignoring the more speculative commodity sector (oil, gold, coffee beans), over many calendar years, equities, commercial property and fixed interest securities (such as Gilts and Corporate Bonds) have far outperformed cash on deposit (grey). 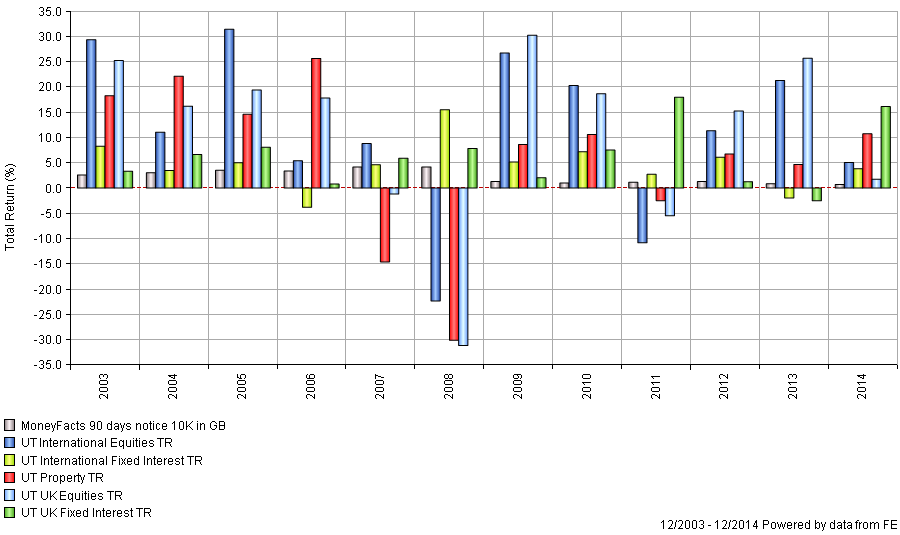 In 2005 to 2006, virtually all of our clients took our advice to sell commercial property related assets as we believed they were becoming overvalued. Even though some were still saying “but property always makes money?” and despite the fact that property had done so well over the past 40 years, this was no indication that the sector would continue to do well. We may not have a crystal ball but the chart demonstrates what happened to property (red) in 2007. Why? The magic word that everybody seems to forget………. affordability.

On 14 July 2011, when the contagion was spreading from Greece to Italy and Italy was regarded as “too big to fail” but “too big to bail”, we also advised all our clients to sell all European funds and move into other predominantly non Eurozone regions. We made this recommendation to all clients holding some continental European funds as we were concerned about the value of the Euro. Any decline in the Euro relative to Sterling would cause a headwind or loss for investors from the UK. International equities (in dark blue in the above chart) performed worse than UK equities in 2011, justifying and supporting our stance.

If your browser does not support embedded documents such as these, just click here.

Arc Eden believes that active management such as this makes a big difference to investors. Our question is, if you invest elsewhere or if you manage your own money, are you active or do you or your advisers just follow the herd and chase last year’s best performer? If they do, you can do better, either by appointing an active manager such as Arc Eden or by turning off your adviser’s fees, saving money and doing it yourself.

The market data above is provided by a third party and is for informational purposes only. It may also be delayed.

The currency data above is provided by a third party and is for informational purposes only. It may also be delayed.